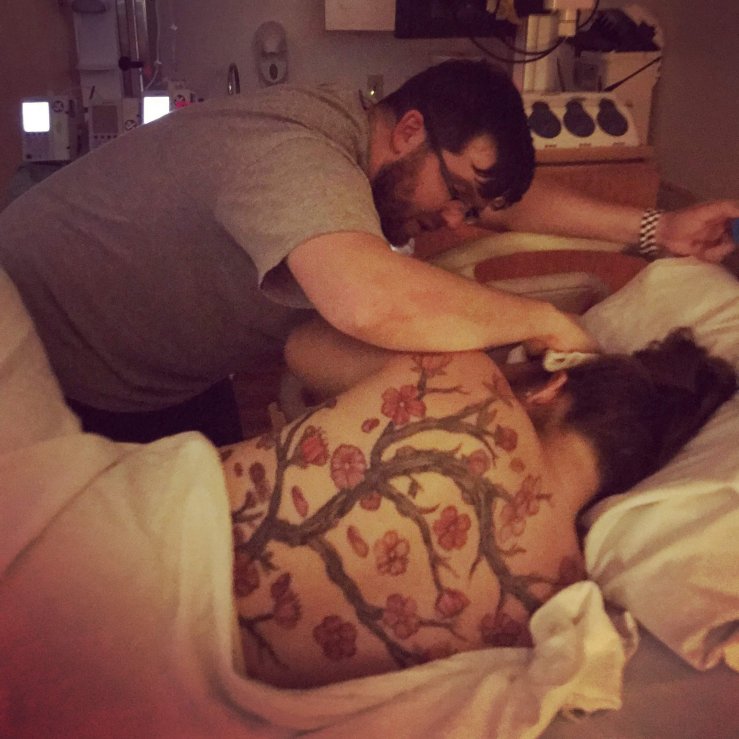 So, we showed up to the hospital for my induction at 7:30pm (we were a tad late, we were supposed to arrive by 7pm). Then, we got admitted, and started cervidil around 8:30/9pm. Cervidil is supposed help dilate the opening of the uterus (cervix). It is a vaginal insert that contains a type of medication called a prostaglandin. It helps jumpstart labor by softening the cervix and preparing it for birth. That’s why it’s typically used in women who need to have labor induced but whose cervix is closed or hasn’t “ripened” yet (TheBump).

My husband and I watched a little bit of tv on our iPad, as well as watched the first episode of the Netflix show Mind Hunters (highly recommend). I got the worst night of sleep in my entire life! I tossed, turned, and every few hours I needed my vitals checked. Prior to “going to sleep”, the nurse offered me benadryl to help me sleep, but I don’t like taking medication if I don’t need to. Hind sight, I wish I had taken the benadryl because the day ahead of me was going to be such a LONG day.

Eventually, morning rolled around and I ordered breakfast at 6:30am- French toast (yum). At 7:30am the cervidil was removed and pitocin (pit) was started at 8am (Sunday October 15). They started the pit in small increments, and every 15 min upped it by 2 units (the max being 30 units). Before you know it contractions are rolling in! Early on, the only way I knew how to describe the feeling of contractions was “diarrhea cramps “. Before you know it, my midwife Juli, recommend we call our doula, Bridget (worlds greatest doula). Which is funny because in that moment, I really didn’t think Bridget needed to come yet. Boy was I wrong! It took her about an hour to arrive and as soon as she got there my contractions had REALLY picked up.

I could no longer talk between the contractions! They were hitting me hard EVERY 2 min. One right after the next. I tried many different positions to ease the pain. One of my favorite positions early on, was sitting on the peanut ball facing Kevin (while he faced me sitting in a chair). The peanut ball is similar to a yoga ball, but in the shape of a peanut! I’d put my legs on either side of Kevin’s, and I’d have him use his legs to push mine out, but also use his hands to squeeze my legs in. It sounds like a very strange position, but there was something about the counter pressure that felt great! Then, I struggled with thinking I was actually going to have diarrhea! Luckily I didn’t have diarrhea but, I did finally go to the bathroom (yes you will poop in the laboring process-get over it).

Between going from the peanut ball, to standing up swaying, I eventually ended up in the tub, because the contractions were out of control. Oh and not to mention when I was breathing, I was somehow whistling. No clue how, because I can’t really whistle! Anyways, I labored in the tub for a long time which was great!! There’s something about being in the water that really helps! So, after being in the tub for approximately 4 hours, Juli wanted to check how dilated I was. I got out of the tub, and when she checked me, I told her I did NOT want to know my progress. I was worried I wouldn’t be very dialated, and I’d get discouraged because I had been laboring for so long.

Thank God she didn’t tell me because I was only 4cm dilated! So then I continued laboring. I get in the tub, and out of the tub. In the bed, and out of the bed. On the peanut ball, and off the peanut ball. I was all over the place, trying everything to get through each contraction. My one nurse, April, early on described pitocin contractions like the ocean. Every 2 min getting hit with a wave, and you’re able to ride them, but every once in a while one will knock you off your feet. Just when you think you can’t get back up, that’s what bridget (my doula) and Kevin (my husband) are there for! To pick me up and help me. She was right! If it weren’t for Kevin and Bridget, there’s no way I could of gotten through it.

So at some point I ended up back in the tub and it was getting too real. I was starting to sound like a wild animal. I was beginning to scream during contractions. Bridget and Kevin both were trying so hard to get me to deep moan through them, and eventually I picked up on it. For whatever reason, I could not seem to grasp the deep moaning. I was exhausted and losing steam. At one point in the tub, my body was shivering so bad, but I wasn’t cold! Somewhere along the lines, I had to go to the bathroom (yes #2 again), and my mucus plug fell out! Part of me was so excited because it meant that everything was really working!! But another part of me was also completely terrified because it meant that everything was working!

We believe, at that point is probably when I began “active labor“. Shortly after that, I wanted to get checked, and I wanted to know the status. Juli checked and I was 6cm. Everyone was so elated! All I was thinking was, how can I only be barely halfway there. I know that sounds really pessimistic, but I was struggling. Luckily, I was able to keep going! I’m not sure how much time went on, but I continued with my crazy position changes, and the tub really was my best friend. After the last time in the tub, things were beginning to seem impossible. I really didn’t think I could go on much longer. I was in the bed and nothing was taking the edge off. I just kept saying that I couldn’t do it. I never asked for the epidural, but at this point it was all I could think about.

It was about 11pm (give or take), and Juli wanted to check me again, and this time I was 8cm!! I was almost there!! Everyone else could see the finish line! I just had no idea how close that really was. Knowing I wasn’t going to make it much longer, Juli offered to break my bag of waters knowing it would really pick labor up! I decided it was the best decision, because I wasn’t going to make it. My water broke and sure enough, my son started to descend!! After my water broke, there was only an hour/ hour and a half left! I pushed for 30min to an hour and the entire time I didn’t think I was going to be able to make it. At one point, I was repetitively saying, “no no no no no no no!!!” And then the contraction would stop, and I could breathe/catch my breath.

Fast forward a tad, and it’s push time. I had no clue which position felt the best, so I tried them all! I was on my left side but that wasn’t cutting it. Then I turned around and faced the back of the bed. I was on my knees, I bared down to push, and I lowered my head a little too much, because my eyes felt like they were going to pop out of my head (I ended up popping a lot of blood vessels in my eyes)! I was about to pass out!! Luckily, my one nurse Kori, quickly got an oxygen mask on me and I felt much better.

At one point, someone insisted that I eat a honey stick, but it did not agree with me. After throwing up, I spun back around and this time was laying on my right side. Which was good, because he was beginning to come!! I distinctly remember a burning sensation and I didn’t think I’d make it. Pushing through the contractions did feel much better though!! And next thing you know, they’re asking me if I want to reach down and touch my baby! At first I was creeped out, but Bridget said if I don’t do it I’d regret it. She was right because I reached down and touched my sons head and I’m SO glad I did. As soon as I touched his head the next push his head came out!! Now the umbilical cord was around his neck (very common), but very loosely because Juli was able to just flip it right over his head!

Then came the worst part. I had to listen to Juli tell me when I could push, and how hard. She then told me NOT to push at one point, and I remember telling her that I had to!! Somehow, I managed to listen to her, but that may have been the hardest part of the day! Next thing you know, it’s 1:20am (Monday October 16,2017), and my son Murphy is on my chest!! I didn’t have him for longer than a second, before Juli quickly cut the cord, and all of these nurses quickly rushed him to a table in the corner.

I was panicking. He was purple. I had no idea what was going on. Over and over again, I kept asking if he was okay. Fortunately, Kevin and bridget both reassured me that this happens sometimes, and everything was going to be okay (but I was still freaking out). The 1 min apgar score was a 3, but the 5min was an 8, so he recovered quickly, but he had swallowed a bunch of blood. They had to put a little tube down his nose and into his stomach to suck all the blood out. The scary part was, they didn’t know whose blood it was. Turns out, it was mine. They think what had happened was, when they broke my water, my placenta probably started to detach, and he ingested some blood during his exit. Luckily, the neonatal nurses were able to recover him quickly, and he was handed back to me. I think the first thing I said was, “oh my god he’s so tiny”. A whopping 7lbs 8oz of pure magic. I’ve never felt so overwhelmingly happy. It was truly magical. Then I noticed how soft he was. I was in heaven. That’s when I wished him a happy birthday and bridget helped me to start breastfeeding!

Next, the placenta was delivered and it was super healthy! Bridget then gave me a glass of OJ, and it was the best thing I’ve ever drank in my life. Unbelievably refreshing and hydrating. We got our skin to skin, as did Kevin and Murphy. Then after that, nurse Kori brought me a personal size pizza and I destroyed it. Then a plate of Mac n cheese and I destroyed that too! I was STARVING. At some point (before all the food) Juli told me I had a small tear and asked me if I wanted stitches. Well, if she had left that decision entirely up to me, I’d still be sitting there trying to figure it out! I have no idea what does and doesn’t need stitches! She’s the doctor! She should know. So she HIGHLY encouraged me to get them, and I took her up on it. After that, they made me go pee and while peeing, they squirted water down there! The only way to pee after popping out a baby!! I was then wheeled into the postpartum room, while holding Murphy and we got to enjoy every second of our angel. I was DETERMINED to have a natural birth and I DID!!

I could not be more pleased with our birthing story. I am however, looking forward to our next baby because, hopefully I can do it 100% intervention free!!